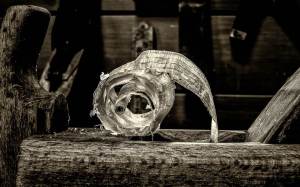 The judge for the Feather/s Competition was Geoff Walker.  Geoff talked briefly on his life as a photographer and his Adobe certification.  He also discussed the work of Julieanne Kost, who is a Principal Digital Imaging Evangelist for Adobe Systems from the USA.  She will be at the PSNZ National Convention this year in Tauranga from 29 April – 3 May. For the first competition of the year there were 16 prints and 30 projected images. The entries will be on our Gallery page shortly. Greg Arnold was the best print winner with his beautiful image of a wood shaving (pictured above).  Geoff discussed whether the image actually fitted into the category and his final opinion was, yes.  This image was the last print Geoff looked at and as soon as he saw it, he just knew it was the winner. In my opinion (Jan), Greg definitely thought out of the box on this one, very creative indeed and well done Greg, a really lovely image. Best projected image went to Anne Nelson for her “Repose” black and white image of a swan. This image also stood out to Geoff.  Well done Anne. 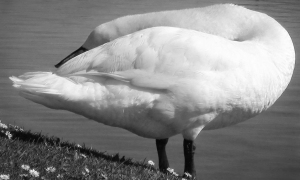 Geoff commented on a great turn out of members and the improved standards of the clubs photography since he last judged a competition.  His overall comment was that members had put a lot of thought into making the photos and he was impressed by the standard of the entries. Some constructive judging comments from Geoff were:

At the end of the night Geoff talked about his time in Uganda and the photographic projects he is involved in over there. It was great to have Geoff come, talk and judge our competition. I hope you all enjoyed him in sharing his photographic knowledge with us. Geoff said that if anyone at the club wants to ask Adobe questions feel free to contact him geoffwalkernz@gmail.com Fred Wotton is our Panorama speaker, the workshop will be at the clubrooms 3rd March 7.30pm. The Panorama competition will be on 11th April.   — Jan Abernethy